British Loyalists, after the American War of Independence, largely, had two choices. Britain offered them refuge in Canada or they could go to the Bahamas. Both choices came with generous settlement packages of land and free provisions to help them get established in the new colony of their choice.

There were many qualities which made the Bahamas attractive to the Loyalists. Settling on relatively uninhabited islands would give the Loyalists unfettered access to all the untapped resources the land offered. Also, they could pretty much do what they liked. No one would be looking over their shoulder. The islands were small and political power centralised in Nassau. This was immensely attractive because it meant that access could be easily had to the Governor and those who sat in the Assembly.

When the Loyalists began to arrive, with their slaves and agricultural knowledge, the Bahama colony was more than they imagined. It offered a new beginning and a new freedom.

As soon as the Loyalists understood the all important power of numbers, they began to use it to do what the Americans did to the British. They used their collective influence to seize political power. The Loyalists would do the same in Nassau. Unfortunately, for the early Bahamians, they didn’t stand a chance against the savvy, war-hardened newcomers.

The early Bahamians of the late 1700s, didn’t realise the full import of the Loyalist presence in the Bahamas, until it was too late.

With generous land grants, compensation monies, bestowed titles and in some cases, high level government jobs, the newcomer Loyalists were well placed to make demands on the unsuspecting Bahama Assembly.

Eventually, their social power became political, then economic, and then financial. Soon the Loyalists, and their descendants would wield an all encompassing influence throughout the Bahamas, long before the end of the 19th century.

By July 1784, the Loyalists had formed themselves into a powerful lobbyist group in Nassau.

From the Bahama Gazette, No. 1, printed at Nassau, New Providence, the 31st of July last, we learn, on the 24th of the same month, at a meeting of the American loyalists settled on the Bahama Islands, heard in the town of Nassau, the following resolutions were entered into, viz.

Resolved, That it is necessary in the present situation of the American loyalists, that they do form themselves into a body, for the purpose of making such representations, and of adopting such measures, as they may deem requisite to promote their general interest.

Resolved, That the American loyalists, settled on the different islands within this government, be requested to be requested to appoint one or more deputies from each, to meet at Nassau, in New Providence, the first day of September next to confer and deliberate upon the measures most likely to accomplish so desirable an end.

Resolved, That it is the sense of this meeting, that the Bahama Islands will afford a comfortable asylum to the American loyalists; and that the soil and climate are well calculated to produce cotton, tobacco, Indigo, fruits, provisions, and other valuable articles.

Published by order of the meeting,

Only a few months later, by December 1784, the tone of the meetings had taken a more adversarial tone. By the close of 1784, the Loyalists has elevated themselves from mere new settler group, to a fully fledged formal Board. Soon, they began to demand promised rights from Bahamas Governor John Robert Maxwell.

Where was the land and economic concessions promised to them by England?

Governor Maxwell told them that he came to The Bahamas to make money and had no interest in seeing new settlers coming to the islands. When their requests were ignored, they wrote to the King in England to demand Maxwell’s removal.

The board of American loyalists, at Nassau, New Providence, in the Bahama islands, lately transmitted a well-penned spirited petition to England, in order that it may be presented to their Sovereign—– Among other grievances which they experience in those islands, they complain much of the unprovoked and injurious conduct of Governor Maxwell towards them, and pray for his removal from that government, considering it is a point essential to their very existence as a people, and that they would prefer that the primitive state of uncivilisation first pointed out by Heaven, to a continuance under such a representative of their Sovereign. They assert, that the instances of his injustice and oppression are endless; and that their Governor, contrary to his duty and office, hath permitted American vessels to trade in their ports, and that the custom house officers, under his influence, had refused to seize them,

notwithstanding the most pressing applications made to them for that purpose. That he had antedated petitions for lands, to answer private purposes, and had publicly declared he came to that country to make money; and entirely disregards the interest of those who lived under his government; and he did not wish to see a single new settler come to the Bahamas.

By 1785, the Loyalists had all but declared war with the Bahamas colony government and Governor John Robert Maxwell. They disliked the island’s Assembly and by all appearances, the feelings were mutual.

At a meeting of the committee of American LOYALISTS settled in the Bahama islands holden at the house of Robert Johnston, Esquire, in the town of Nassau, on the 8th day of June, 1785, the following resolutions were unanimously agreed to:

Resolved, That it is the opinion of this committee, that the speech of the lieutenant governor Powell, at the conclusion of the late session of assembly, so far as respects the opposition made by the American loyalists to the present weak and contemptible administration, is illiberal, untrue, and malicious, evidently calculated, under the influence of a despicable faction, to insult and oppress his Majesty’s faithful American Loyalists settled in these islands.

Resolved, That it clearly appears from the most undoubted testimony, that the said Lieutenant Governor Powell hath violated his promise, most solemnly pledged to the body of the American loyalists, to dissolve the present illegal and unconstitutional assembly.

Resolved, that the proceedings of this meeting be published in the Bahama Gazette.

The inhospitable cold of Nova Scotia, Canada drove more Loyalists to the islands of the Bahamas four years after the initial resettlement.

It would appear that some Loyalists, who had originally chosen Canada, after the American War of Independence, found the land and conditions of the north too harsh.

By 1788, a new wave of newcomers were heading towards the island of Andros.

Several very respectable families have arrived here since our last from Nova Scotia, with intention of settling in these islands.

The island of Andros is now said to be one of the most valuable in the Bahamas. It’s vicinity to the market of an increasing town; the advantage of the trade-wind being a fair one both for going and coming between this and that island; the abundance of excellent timber; the numerous inlets; the extensive island navigation; the plenty of fresh water; and the quantity of fish and turtle on the coast; these are the arguments, and weighty ones they certainly are, which those which those who have already settled there hold out to attract more inhabitants.

About 200 of the late inhabitants of St. Andreas on the Musquito Shore, have formed settlements on Andros Island, and the families lately arrived from Nova Scotia, we are told intended to fix themselves there. 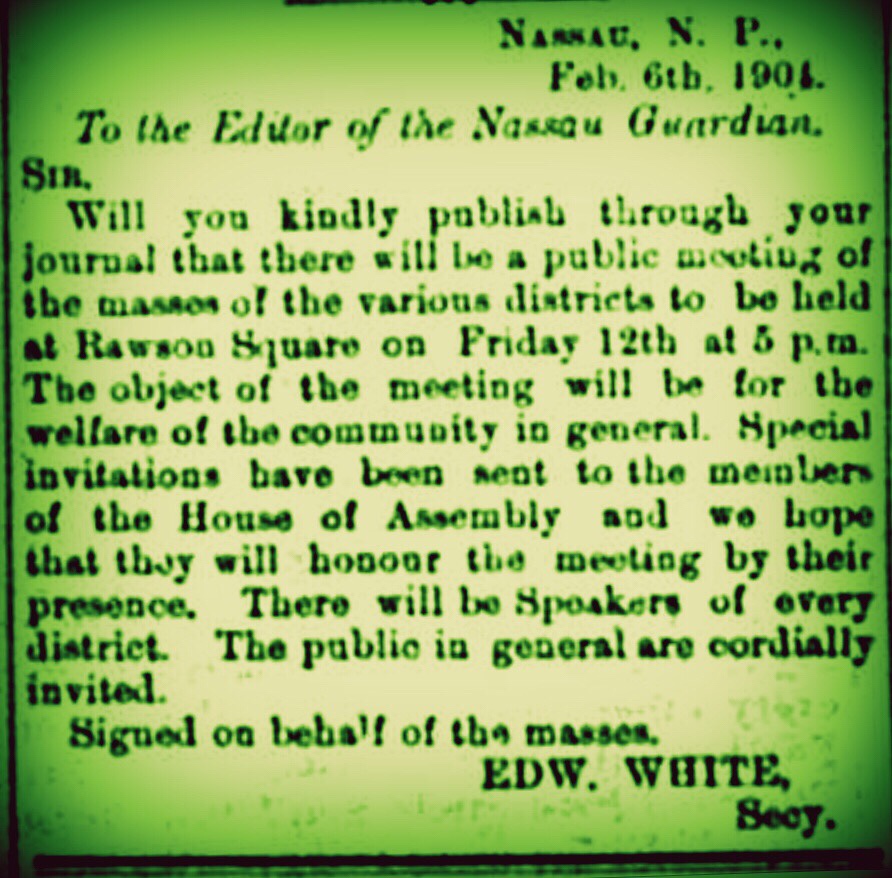 When A. D. King Tried To Be M. L. King in Nassau It Became The First ‘GTFOH’ Moment In Bahamian History 1968