Savaletta Lewis Hanna died of a stroke on 30th December 1953. She was 80 years old. Savaletta would have been born in 1873 – before electricity, the telephone, even before the automobile were invented. She lived in Grand Bahama, somewhere between the settlements Russell Town to Deadman’s Reef. She was a farmer.

Like a number of her generation, Savaletta came to own vast acreages of generation land, either through devise (inheritance) or through family, several generations squatting on the land, after slavery ended.

However the gods brought it to her, Mrs. Savaletta Hanna, blind, illiterate and a poor farmer, owned 1,700 acres of valuable land in Grand Bahama.

Whatever Savaletta’s life was, her end, we can only lament as an economic tragedy. Of these times, when illiteracy and poverty, meant not only injustices in the current life, but also generational injustices meted out to lives yet to be born, tragedies of these sort become exponential, and all the more worthy of our pause in the present day.

Savaletta Hanna’s will was forged. This was established, years later in court, in 1967.

The alleged forger was her son-in-law, Walter Russell. Oddly enough, by 1967, son-in-law Walter Russell was 80 years old himself, the same age as his mother in law was, when she died.

Savaletta’s land, some 1,700 acres was sold by her son-in-law Walter Russell to Freeport creator Wallace Groves and Grand Bahama Port Authority, for $4.00 an acre. Give or take a few shillings, about $6,800 exchanged hands for the land.

Savaletta Hanna, towards the end of her life, was blind. She was also illiterate. She did not know how you read or sign her name. So, when her will was introduced in court, years later, by her supposed sole heir, her son-in-law and his wife, experts agreed that the beautifully written signature, could not be Savaletta’s.

Remember these numbers, because old Walter Russell, Savaletta’s son-in-law, would try to claim in court, in 1967, that he didn’t know what he was signing when he sold to Grand Bahama Port Authority. Walter Russell would claim that the price he sold for originally, was too low, and now that the land was a thousand times more valuable, he should get more money.

Few Bahamians back then, realised the value of the undeveloped land they owned. One of the many natural resources, of The Bahamas, which was being heavily exploited was the timber of the pine forests. Commercial development, hotels and exclusive second homes were the ultimate goal, but the intermediate money maker was selling all that valuable timber, the flotsam and jetsam, that came from cutting down thousands of acres of green fields.

For The Bahamas, the black man’s historical election victory in January 1967, was but a minor speed bump, a sleeping policeman, to the real movers and shakers, the money makers, in the country.

In 1967, Wallace Groves was a busy man. Groves, as the dubbed ‘King of the Bahamas’ may have been busier than the new Premier Lynden Pindling. Maybe…

Wallace Groves was in an and out of one courtroom after the other as well as testifying to the PLP (Progressive Liberal Party) ordered Commission of Inquiry hearings into gambling deals made under the UBP (United Bahamian Party) administration.

If Groves even broke a sweat, over all of the lawsuits surrounding shady land deals, and his gambling ties to the mafia, or his payoffs to every then government official from Premier Roland Symonette to Minister of Finance Stafford Sands, he didn’t show it.

THE CASE – THE PAYOFFS– BUSINESS CONTINUED AS USUAL

William J (Bud) Hanley had apparently been picking land fights with Wallace Groves for a few years. One gets the impression of the ambulance chaser type lawsuit bringer. If something falls from the tree, great. If not, try again.

Wallace Groves, in the early 1960s was a big target. He had dozens of shady land deals in his pocket. All that was needed, was to ferret out the right one, with enough dodgy roots. Dig up the dubious roots, maybe… just maybe… you could shake some of the rotting fruit from the Wallace Groves’ tree. One of these rotten roots was the generation land acquired through the will of illiterate Savaletta Hanna.

Savaletta who couldn’t write a word in her whole life, suddenly signed her name with beautiful cursive handwriting.

It goes, without much elaboration, that all this, and much more, was accomplished with the help of Stafford Sands, Minister of Finance, and the entire UBP Bahamas Cabinet, who assisted in identifying poor Bahamians sitting on valuable land in Grand Bahama, and elsewhere in the Islands. A target list was undoubtedly drawn up. This is not apocryphal or idle speculation, these are historical facts. All that was then needed, once the land was identified was a good signature pen, a few kind words and lunch money to buy two hundred year held generation land of Bahamians.

Payoff Number 1: Groves Settles out of Court with Savaletta Hanna’s son-in-law Walter Russell for $70,000 on a charge of civil fraud.

Even before the case was decided, Walter Russell who had been accused, in court, of forging the signature on the will of his mother-in-law Savaletta, which gave him full ownership of the land, even over her own son, took a settlement of $70,000 from Groves.

Walter J. Hanley, the man who brought a land lawsuit against Wallace Groves, settles out of Court for $1,200,000 and a $50,000 a year job at Grand Bahama Port Authority.

By 1969, just over a year after the March 4, 1968 end of the ‘forged will’ lawsuit, started by Walter J Hanley against Wallace Groves, Hanley was now an employee of Groves.

In 1969, Hanley himself the subject of a lawsuit over fees owed stemming from the ‘forged will’ same lawsuit. Hanley was claiming privilege as an employee of Grant Bahama Port Authority.

By 1977 William J. Hanley had died, but had opened a bank ( International Bank of Hong Kong and Singapore Ltd) for himself sometime between 1967 and 1976. He called himself Sir William J. Hanley

One of the 21 claimants was Norman Russell the oldest son of Walter Russell (son in law) alleged to have forged the will and Victoria Russell (daughter) of Savaletta Hanna.

Randol Fawkes, lawyer for the plaintiffs Rice and Fortnum and 21 Others, was criticised by his clients for his performance in court 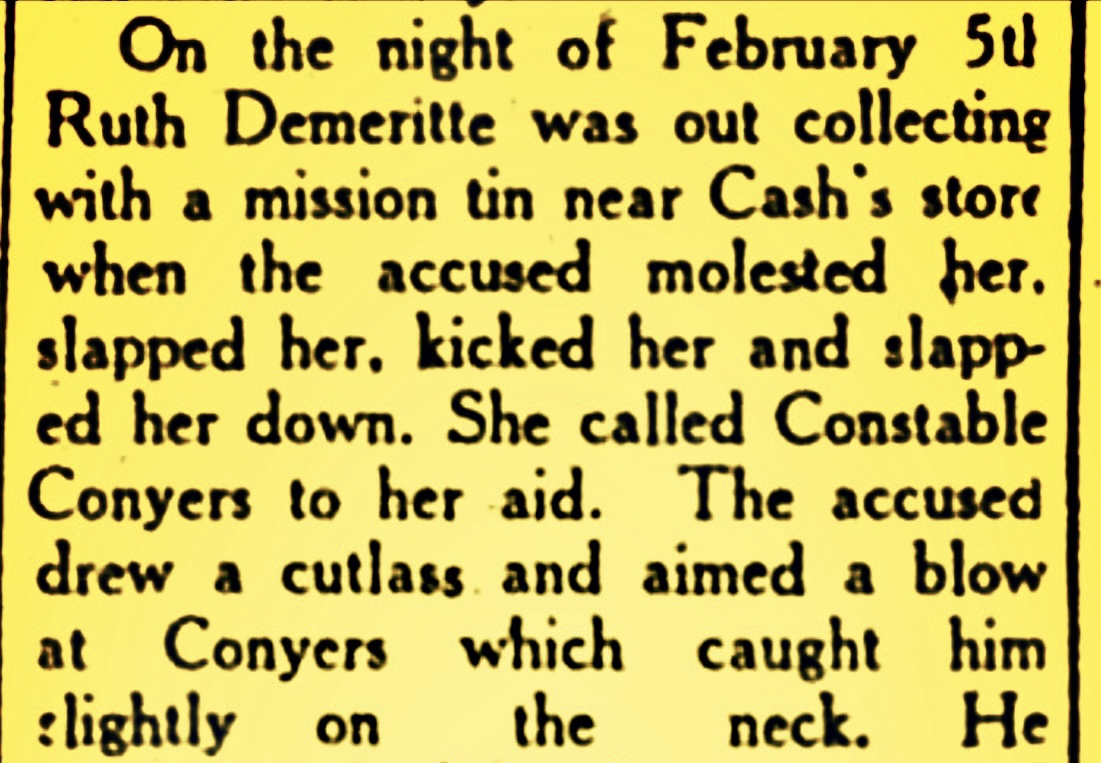 Ruth Married William Munnings, After He Comes Out Of Jail For ‘Chapping’ Her Mother With Cutlass in 1949 – Then He Murders Her Child and Hangs in 1959