Herbert Brooks was just nineteen years old when he left Nassau on the boat the France E. which was sailing for America. He listed as his nearest relative in Nassau, a sister named Ella Brooks.  Herbert arrived in Miami on the 20th January 1919.

A years and a half later, Brooks would lay dead on some rusty old train tracks.  His skull split in half. The police said he jumped through a train window between Daytona Beach and Ormond. Bahamians in Miami said, he was lynched by a  mob and the train story was a cover up.

Herbert Brooks, a  24 year old negro, had been charged with assault and then the rape of 55 year old white woman. Brooks supposedly was identified as being the suspect because he had a hole in his shoe and the suspected rapist left a shoe print with a mark on it, similar to a hole.

Brooks was arrested. Some 1,200 angry white men surrounded the jail demanding that Brooks’ be turned over to them.

When news spread that Brooks was dead, there was fear of a negro riot among angry Bahamians of the coloured section of Miami. The Florida National Guard was mobilised. National Guards, as well as the police, went to the coloured section of Miami with a powerful display of numbers and guns. Mayor of Miami went to the funeral home to address the groups of negroes waiting to see the body. They were waiting to look for rope marks around his neck.

Herbert Brooks’ body was given to his father, Robert Brooks, a Bahamian, for burial.

Police reported stated the accused managed to somehow leap through a train window in a bid to escape custody. Brooks was shackled. Both his feet and hands were in chains. How did he manage to jump with heavy chains and an armed police guard watching him, has never been fully answered.

Black Arrested for Assault on an Elderly White woman Yesterday Jumped from Train at Ormond.

“Herbert Brooks the negro arrested yesterday on suspicion of having criminally assaulted a white woman 55 years of age at her home on Fifth Street, near Avenue J. early yesterday morning, jumped from the Florida East Cost passenger train at Ormond at noon today and was instantly killed while being removed for safekeeping to the Duval county jail in Jacksonville.

Information to that effect was received at 2 o’clock this afternoon by Sheriff D. W. Moran from Sheriff W. R> Monroe of Fort Pierce, a deputy from whose office was taking the prisoner on the last step of his journey from Fort Pierce to Jacksonville. Brooks was taken to Fort Pierce from Miami by automobile last night when rumour reached the sheriffs’s office the plans were under way for storming the jail to get him.

Brooks was 24 years old and was born in Nassau.

Brooks was arrested at 10:30 o’clock yesterday morning by Detectives J.W. Bishop and C. G. Pratt of eh city police department at the negro’s home on Avenue H. between Fourth and Fifth Streets, only a short distance from the home of the alleged victim. Suspicion first pointed at him from the fact that while the officer were making a tour of the coloured houses in the neighbourhood the negro, on noticing them, slammed the door shut in their faces and only opened it when ordered to do so. He could not give a satisfactory account of himself and answered in a general way the description of the man who attacked the woman.

Footprints near the scene of the crime, which showed the mark of a shoe with a hole in it, are said to correspond to the shoe worn by Brooks.”

MILITIA IS READY FOR TROUBLE IN NEGRO QUARTER

“Miami’s company of the national guard, was ordered shortly before 2 o’clock this afternoon by the adjutant general, Sidney J. Catts, Jr. for possible duty in the negro quarter. Trouble was feared when the body of he negro rapist Herbert Brooks, was brought back, but at mid-afternoon, there was no sign of any disorder in any section of the city.

Captain Robert Newton Ward is in command of the company. Mobilization of the entire personnel of the company was effected within 15 minutes after the order was issued.

The guard is held at the armoury on West Twelfth Street, under arms.

A crowd of negroes which gathered this morning at the undertaking place of the Antilles Undertaking company, 532 Fifth street to view the body and largely out of curiosity, dispersed after a talk by Mayor Smith who told them that the body showed plainly that Brooks’ death had been caused by jumping and sensational reports about how he met his death were not true. The mayor advised them not to congregate on the streets in number bu to go quietly about their business and have the funeral for Brooks as quiet as possible, to which they agreed.

The body of Herbert Brooks, 24, the negro arrested on suspicion of criminally attacking a white woman 55 years of age early last Friday morning at there how on Fifth Street near Avenue J, was brought back at midnight last night from Ormond, where he jumped to this death from the window of a morning Florida East Coast passenger train while being take from Fort Pierce to Jacksonville by a deputy sheriff from the office of Sheriff W. R. Monroe of St. Lucie county, having been taken by automobile Friday night from Miami to Fort Pierce.

With the exception of the fact that the man’s head was split where he struck a cross tie in jumping headfirst from the car window, there were no other marks on the body.

The body was turned over to Robert Brooks, father of the negro, by the county authorities and arrangements were made by him with a local coloured undertaker for the burial, which was planned for some tine this afternoon.

The body was identified by the county authorities as that of Brooks and an investigation of the crime will be made tomorrow morning by the grand jury of the May term of circuit court, which has been ordered by Circuit Judge H. Pierre Branning to be reconvened for that purpose.

It developed today that when Brooks was spirited out of the county jail at 7:35 Friday night he was taken out of the front door of the jail, while portions of the mob that planned to lynch him were gathered on the Twelfth street side of the court house. Brooks was told by Deputy Sheriff R.C. Williams that his life was in danger and depended largely on the way he acted. He was told to dash to the car, and lie low in the bottom of the car, the waiting automobile, a high powered which he die. He remained in that position it was said until after West Palm beach was passed, scarcely moving a muscle.”

Bahamians were angry. Was Brooks lynched during the train journey or even more likely just thrown from the train by the police? The Miami Mayor was taking no chances. He called out the National Guard.

In the end, the Bahamians in Miami accepted what had happened to Herbert Brooks. They didn’t really have much of a choice. Many Bahamians, in southern Florida, at this time, didn’t have legal status or citizenship. They risked losing jobs, getting shot or killed, imprisoned, deported and even lynched.

Did Brooks do what he was accused of?

The case ended with the death of Herbert Brooks. 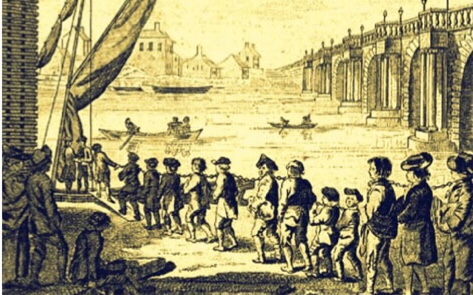 Bahamas Gets British Convicts as Labourers and Settlers 1856