In 1971, Henry Milton Taylor, founding member of the Progressive Liberal Party in 1953, was rueing the day that he ever invited a young lawyer named Lynden Pindling to join his Party. Taylor’s anger at being effectively sidelined, in his own political party, and regret that he didn’t do something about it sooner, was bubbling over like a scorching lava in a volcano.

Taylor’s open letter to the foreign press was a dagger meant to gut Pindling’s political back. Henry wrote that he was joining his ideological arch enemy, his political nemesis, the United Bahamian Party, in an effort to do one thing: take down Lynden Pindling.

By 1971, just four and some years after his 1967 historical political win, Bahamian Prime Minister, Lynden Pindling was a fighter on the ropes.

Two victories at the polls, in 1967 and 1968, solidified Pindling’s popularity among the electorate. The people loved Pindling. A growing number of political insiders didn’t.

1970 – Pindling Taking Punches From All Sides

Political punches were assailing the man, many called a Moses, from all sides. As the sun rose and set on those hot Bahamian days, the real heat was being generated behind the scenes in Pindling’s inner circle. A career which began on dizzying highs of popularity, was now almost a political crime scene, as the number of people, determined to see Pindling off, as an Ides of March Julius Caesar, grew by the day.

Everywhere Pindling turned by 1971, more and more, seemed to have their political daggers drawn for him. The cuts were deep. The slashes were fierce. Unlike Julius Caesar however, no one was able to deliver that metaphorical death blow to Pindling’s career.

“Expel the Bahamians, restore the pirates”

Tourism was down, unemployment was rising, and foreign investment had taken flight. The Bahamas in 1971 was a colony on the brink of national independence, but in severe economic straights. A political panic was permeating, so much so, that the motto being whispered among many became, “Expel the Bahamians, Restore the Pirates.”

What was envisioned as the coup de grâce to Pindling’s political ambitions; Henry Taylor formally announces an alliance with his once ideological and political nemesis, the United Bahamian Party.

Henry Taylor and Lynden Pindling would eventually reconcile. Taylor was knighted under the PLP becoming Sir Henry Taylor on 23 July 1980; and appointed Governor-General of the Bahamas (1991–1992). 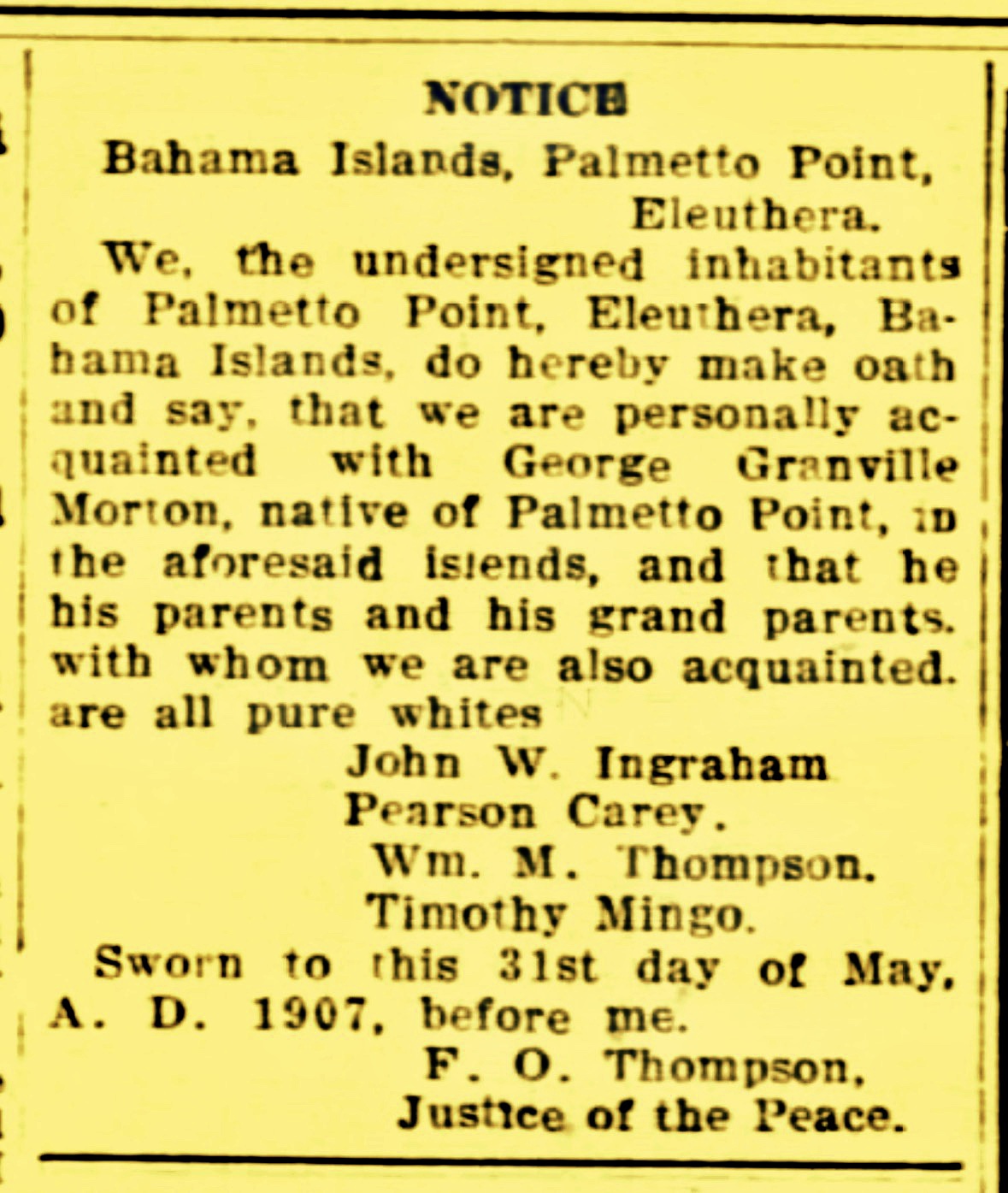 Attesting to the Pure Whiteness of George Granville Morton of Palmetto Point, Eleuthera 1907