Despite all outward appearances, there was a storm brewing over New Providence in 1967. The January general election ushered in a type of tumultuous change, which just didn’t sit well with some. Credible threats of violence were made against new Premier Lynden Pindling, and newly appointed House Speaker, Alvin R. Braynen and their families.

Pindling was the first negro, black, coloured, (however one wished to refer to it) Premier of the Bahamas. Black men in power is certainly a blasé notion today, but in 1967, it was nothing short of earth shattering. Only a fool, or a blind man, could not understand what this meant, during a period of countless soul crushing lows and hard fought highs, which hallmarked the global civil rights era.

America, next door to The Bahamas, was in the middle of a civil rights revolution. Malcolm X was killed in 1965. John F Kennedy killed in 1963. Martin Luther King would be killed in April 1968. Riots. Protests. And countless others had been jailed, brutalised and murdered in America, Haiti, Cuba, and Jamaica.

For The Bahamas, three hundred years of white minority rule had suddenly been overturned by the ballot box. No violence. No murderers. No political jailing. The earth shifted for the tiny island nation —- albeit, relatively quietly.

Lynden Pindling, in the eyes of some, could not be allowed to succeed. Foes and surprisingly, even some old friends, took aim at new the Premier.

Alvin R. Braynen, a hero to some, but to others with very narrow minds, was seen as a traitor to his race. A white man who cast his lot with a negro-led political party.

1967 was a perilous, tumultuous time for Alvin Braynen.

Some Members, who sat on the United Bahamian Party, Official Opposition, side of the aisle, like Roy Solomon UBP MP for San Salvador, feigned an obtuseness, to the personal danger, everyone knew existed for some in the House of Assembly.

Alvin R. Braynen, a white man, and traditionally a UBP man, ran as an Independent in 1967 and won. Braynen cast his lot with the PLP, as did Randol Fawkes who ran on his Labour ticket. These two men, made the PLP win, in 1967, possible. In casting his political lot with the Progressive Liberal Party, Braynen went against uber-powerful men like Sir Roland Symonette, who gave Braynen one of his first jobs in Nassau, and probably backed him when he went into politics. And there couldn’t have been but a handful of people who could say so to Sir Stafford Sands but Braynen did.

“After occupying teaching posts at Bimini, in 1923 and at Tarpum Bay, in 1925, Mr Braynen returned to Nassau during the latter year and leaving the Government service, he accepted employment with R. H. curry & Co., Ltd as a shipping clerk. Three months later he went to work at Symonette Shipyards, and in 1931 was appointed agent for the firm which he still represents, the Sinclair Cuba Oil, Co., S. A.” —-The Nassau Guardian, TUESDAY 10TH MAY 1949

By July 1967, Alvin R. Braynen needed a police guard outside his home and Premier Pindling needed police protection, even in the House of Assembly

Why The Bodyguards? Solomon Asks Premier

The Premier, The Hon. Lynden Pindling, has been asked if he is in fear of his life. And, if so, why? The question has been fired by Opposition member Mr. Roy Solomon (UBP-San Salvador), who also asks if the Speaker, the Hon. A. R. Braynen, is in danger.

He claims a police inspector is on hand for this purpose. And he wants to know why this is done at the public expense when the police force is under establishment. Mr. Solomon also asks: “How many policemen are involved and what is the cost to Government for providing guards and chauffeurs for the Honourable Premier and Mrs. Pindling?”

Referring to the Speaker, Mr. Solomon asks why it is necessary for Mr. Braynen’s home to be under police protection. He also seeks the number of police involved and the cost to the Government.

“Is the Honourable Speaker in fear for his life? If so, for what reason?” The questions are among a series tabled by Mr. Solomon for distribution among members for this week’s meeting of the House. He asks if any Ministers’ wives are employed by the Government and, if so, who were they? Is this not considered conflict or interest and prejudicial to morale in the Public Service?” He inquired.

Mr. Solomon also wants to know if it is Government policy to provide Ministers with free motor vehicles. “If so, what Ministers have been provided with this amenity?” he asks. He also seeks the cost to public funds in providing this amenity.

Briton Eaneas charged with wilfully attempting to decrease the population of New Providence. 1866 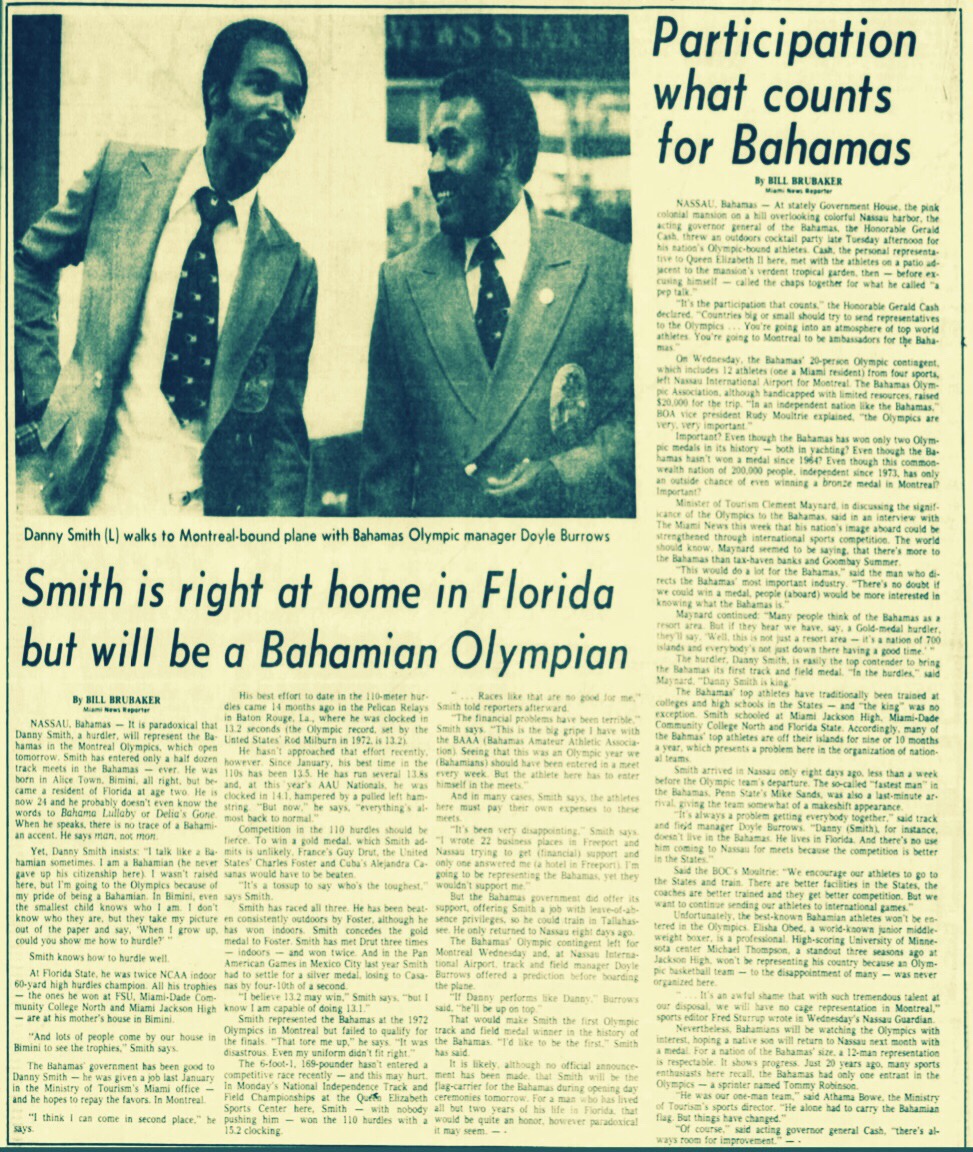 Florida resident competes for Bahamas in the Olympics 1976