In 2017, the FNM government, after voting against proposals for an increase in Member of Parliament salaries while in Opposition, suddenly proposed salary increases after winning the May 10th elections. One particular comment came back to haunt the Bain and Grants Town MP Travis Robinson, like indigestion from two-day old conch salad. Robinson said, after just a few months on the job, that parliamentarians should make $60,000 to $70,000 annually. He went on to compare the current salary to “janitorial salaries.” Robinson took a roasting on social media for that one.

In 1942, though when the junior member for the Eastern District, tabled a motion proposing some form of remuneration for the twenty-nine members of the Legislative body of the Bahamas, he didn’t bargain on everyone bursting out laughing at him. It was bad timing and a bad proposal. The world was in the middle of a terrible war and the Bahamas was nearly broke helping to fight it, while contributing financially to the war effort in England.

” …hope that no other member takes this proposal seriously.”

“Surely twenty-nine members of substance can be found in a population of over 60,000 in this colony who will be sufficiently spirited to offer their services gratuitously as legislators in the interest of the land of their birth.” 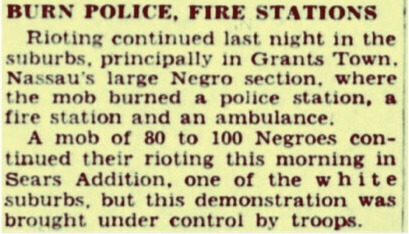