On Friday 21 January, 1972, then Finance Minister, The Honourable Carlton Francis, was subjected to a humiliating and degrading experience at Miami International Airport. Customs officials, not satisfied with a search of his luggage, told him to prepare for a body search. When the Finance Minister identified himself as a senior member of the Bahamas government, customs officials held him and Mrs. Francis at the airport.

Customs officials then called Washington D.C. for a directive. Francis was a diplomat. He was claiming the privileges afforded a high government official from a foreign country.

They called back. Washington ignored Francis’s diplomatic status. They said search to him.

While one officer restrained Francis with his arm twisted behind his back, another unzipped his trousers.

Four hours after he was detained, the Honourable Carlton Francis, Cabinet Minister for Finance of the Bahamas, was allowed to leave the airport and the United States. American officials later said that they allowed Francis to leave after the search. They said, it was Carlton Francis, who stayed at the airport for a further three hours in protest over the body search.

By the time Carlton Francis landed back in Nassau, he was seething with anger. The entire Bahamas was angry as well.

Back In Nassau, Francis Orders All American Barred From The Bahamas

After his humiliating experience in Miami, Carlton Francis knew he couldn’t let what happened to him just go like that. He was a man of power and influence in the Bahamas. Francis decided to use what powers he had at his disposal, just like the Americans did, on their home turf.

After missing flights for the rest of that Friday evening, Carlton Francis landed in Nassau the following day, Saturday. He was boiling mad. The first thing the Minister of Finance did, was to walk over to the Head of Customs and Immigration at the airport. He gave the department an unambiguous directive.

The Honourable Carlton Francis, Minister of Finance, ordered all Americans barred from entering the Bahamas.

At that point, everything at Nassau International Airport stopped.

No Americans were allowed off planes or to pass through into the Bahamas.

Carlton Francis and Mrs. Francis, then went home to relax. The couple had had a long day.

For three hours, all Americans were held at the border. About 340 American tourists had to wait in the Nassau Airport until the order was lifted. Two Pan American, two Eastern Airlines and one Air Jamaica flights were tied up at the airport after the directive was issued by Francis.

It may have been but a mere coincidence but at the same time Carlton Francis was enduring one of the most embarrassing moments of his adult life, President of the United States, Richard M. Nixon was on a private island in the Bahamas.

The Pindling government met to discuss drafting a strongly worded letter to Washington over the handling of a Bahamian diplomat.

WHY DID THE AMERICANS DETAIN THE HONOURABLE CARLTON FRANCIS THAT FRIDAY in January in 1972?

There remains the very significant question of why did the American government, body search, a top level Bahamian diplomat. It makes no sense on the face of it, unless they were looking for something specific? Unless they wanted to intimidate him!

More than a diplomat, Francis was the Minister of Finance. Even after he had identified himself, Washington still wanted Francis’ personally and intimately searched. What exactly did they suspect him of having?

Was it an intimidation tactic?

Was it a show of power by the Americans? What was Washington looking for?

The answer might be found in an article printed less than two months later, in the London newspapers, on March 1st, 1972.

The answer may involve the ownership of a bank, the British – American Bank, the reasons for its license suspension, loans purportedly made to undisclosed Cabinet Ministers and the brother of Minister Carlton Francis, the Reverend Earle Francis, who was supposedly involved in all of it. 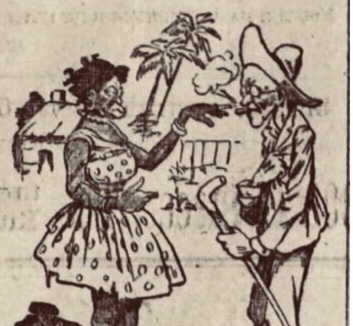