Death came to the Bahama Islands in 1889. William Ephraim Death, an engineer with a most striking name, from Leicester in England, made a significant contribution to a new and growing local Bahamian industry – sisal.

Sisal grass was not native to the Bahama Islands. The prodigious plant was introduced into New Providence, around 1864, by Mr. C. R. Nesbitt, a Colonial Secretary. Sisal grew wherever it was planted. It needed little water, little care and took nothing short of a new ice age to get rid of it. Over the ensuing twenty years, sisal grass, used for landscaping, became a nuisance weed. Bahamians started burning their land to get rid of it.

When Bahamas Governor Ambrose Shea was appointed in 1887, the island nation was in desperate want of new industries. A trip to Mexico gave Shea an idea. Mexico had sisal. They were using it to their substantial economic advantage. Mexico was making hemp rope from sisal and exporting it.

By 1891, sisal grass was renamed locally to ‘Bahama Fibre’ by Governor Ambrose Shea

Governor Shea, as a way of spurring on this new sisal industry across the Islands, began giving away substantial acreages of Crown Land to anyone who would promise to grow sisal.

One of the most famous sisal land takers was Joseph Chamberlain, a prominent British politician. Chamberlain sent his son Neville Chamberlain to manage a huge sisal plantation in Andros. Young Neville spent several years in Andros.

Neville Chamberlain would famously go on to become the British Prime Minister, who would go down in history, for his failed attempt at appeasement with Germany’s Adolf Hitler during World War II.

William Ephraim Death was an engineer and inventor from Leicester in England. His invention, an apparatus to scutch the thick fibrous leaves of the sisal plant, helped to make The Bahamas’s new sisal industry, a profitable, albeit relatively short lived success.

No sooner had Death received a patent approval, that he also received favourable approval for Crown Land to cultivate his own sisal. Nevertheless, Death’s apparatus became an integral part of sisal production and helped to revolutionise the industry in 1889.

“LETTERS PATENT have been granted to Mr. William Ephraim Death for an improvement in apparatus for scutching fibrous stems and leaves, under the Patent Act passes in the last session of Legislature. —- The Nassau Guardian and Bahama Island’s Advocate and Intelligencer SATURDAY 9th NOVEMBER 1889”

“One of Death & Elwood’s Fibre Machines which was received by Capt. H. C. Lightbourn by the last steamer from New York has been under trail this week at Mr. J. S. Johnson’s Factory. It has done very good work, and is by far the best machine for cleaning Sisal hemp yet introduced into this Colony. When in proper working order it is said that 400lbs. weight of fibre can be turned out in a day which would be in condition to be baled the next day. The leaves from which fibre was extracted on Thursday and yesterday were cut from Capt. Lightbourn’s Sisal Farm at Baillou Hills.

We have seen hemp cleaned here by this machine a thread of which stood a test of over 9 lbs without breaking.”

“That whereas there are certain foreign capitalists who are desirous of locating themselves on the Main Land of Abaco and to purchase Crown lands for the purpose of cultivating the Sisal plant.

And knowing how true the remarks are that your Excellency made in our hearing on the joyful occasion of your first visit to us, “that competition was the life of commerce and trade.”

And as they are desirous of having a central point at this place, we therefore pray your Excellency that as Mr. Death has applied for Crown Land for the purpose of Sisal cultivation, with the same desire to make this place as a centre; and as we feel assured one company cannot employ us all with satisfaction to the employed, that your Excellency will so distribute the surveys that Mr. Death will have a portion of his land here.” 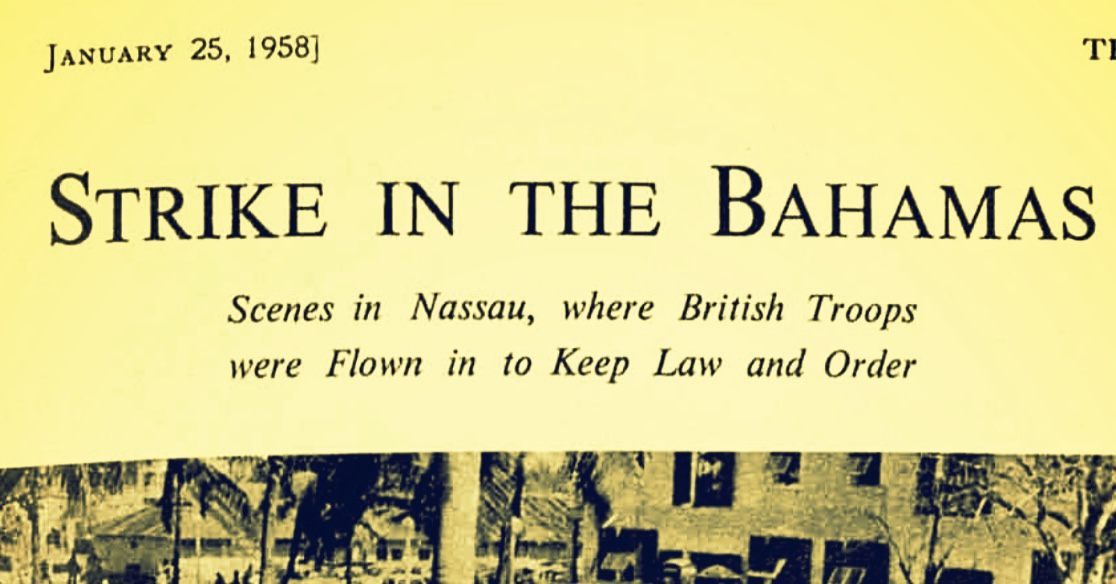 Photos of The General Strike of 1958