For the rest of human time, and for every generation of Bahamians yet to come, this story, of three Bahama negroes kidnapped into slavery, and who fought bravely for their liberty, will henceforth be known as The Hennique Rebellion of 1795.

Admittedly, the story of the Hennique doesn’t quite have that swashbuckling intensity of some of the more famous slave ship rebellions like the Amistad or the Creole, but that is only because its story has never been told.

When three Bahama Negroes were kidnapped from Crooked Island in 1795, and sold and resold and sold again into slavery, they staged a rebellion on a ship bound for France. What is even more surprising about this story, is what is said about the three men when they finally get the ship to Nassau. What can be gleaned from two letters in 1795, was that there was a problem with the taking, the privateering, of the vessels. It appears that at least one was French owned. This may have contravened existing treaty agreements regarding France.

In the 1700s, legalised high seas theft, supported and encouraged, by the various European powers was called privateering. It was all perfectly legal, as long as it didn’t start a war, which it often did. Hired pirates stole goods, wine, money, slaves and even the entire ship itself, from other countries. In return, the privateering country would share the bounty with the captain. It was all very lucrative and enriching. One of the most profitable goods in 1795 were of course, slaves. In order to secure your countries’ safe passage on the high seas, treaties and agreements were made between friendly states.  This didn’t always trickle down to what was really happening on the open seas.

Interestingly enough, Woodes Rogers, the first British Governor of the Bahama Islands, was a privateer, and a very successful one at that.

The story of the Hennique Rebellion begins with a charlatan merchant from Bermuda and court case in the Vice Admiralty courts in Philadelphia, over ships that were privateered in New Providence.  From two letters appearing in the Philadelphia Gazette 13th and 14th April 1795,  there appears to be grave questions regarding the ownership of the ships, the cargo contained, where they originated from, as well as their intended destination. A Vice Admiralty court case was pending, but the owner was anxious to get sailing as quickly as possible, no doubt aware of his stolen cargo onboard.

He refused to wait on the case to be heard by the court.

On the 14th of April, 1795, the owner writes that he intends to set sail immediately for Barbados. He refuses to wait any further.

US Secretary Randolph is mentioned in one of the letters. Edmund Randolph was the second Secretary of State for the United States between 1794 to 1795.

As the ship sets sail in April 1795, something dreadful must have happened on the seas between April and December 22, 1795.  The Bahama negroes were told the ship was going to St. Thomas, when they were really headed across the Atlantic Ocean, towards France.

Just three days before Christmas, the Hennique would be in Nassau. The original Captain of the ship would be challenged, overpowered and thrown overboard by three kidnapped Bahamians, Anthony Sands, Cyrus Fisher, and James Alexander. The new ship’s captain, an American, would be forced to turn the boat around, to set a new course, for home, Nassau.

I wrote you (via New York) by a Mr. Cook, informing of my arrival at this place on the 8th inst. since when I have repeatedly waited on the Governor and Judge; the latter has consented that a clerk shall be immediately employed in copying the records of the Court of Vice Admiralty agreeably to the Secretary (Randolph) orders. The papers are to be examined from time to time by Mr. Harvey, the attorney employed by Messers Perotts. I have had two interviews with the Governor and Judge upon the business of privateering, and agreeable to the Governor’s advice the Judge has promised to both the Governor and myself that all vessel brought here bound for French ports in the West Indies to America shall be suspended by interlocutory decree; the claimant giving security for an appraised value, can proceed with vessels and cargo, and the business suspended until further advice shall be received from the Lords Admiralty. Judge Green declares he has received none–both the Governor and Judge have wrote to Mr. Hammond by Mr. Cook on this business.

In consequence of the Judge’s promise of an interlocutory decree, I have prepared security for the vessels in port, (as it was not in the power of the Captains to get it) and shall send the vessels on to Philadelphia addressed to my house, agreeably to my stipulation here.

This business, and the request of the Governor to wait the event of one trial, or more, induces me to delay my departure till Wednesday the 15th inst. (three days longer than I first intended) when I shall sail for Barbados. I hope my stay will meet with you approbation, as you may rest assured, sir, no unnecessary delay shall take place on my part.

Contrary to my expectation, no trial has come on today, which determines me to set off immediately as I might be disappointed for some time. The Governor has pressed me to stay, but I conceive it would be of little consequence.

I am assured that after giving good and sufficient security, we shall be permitted to take our vessels and go where we please, provided they are from a French port in the West Indies, and there is no positive proof or strong suspicion of the property being French. The governor requests me to issue you sir, that at all times he will be happy to render any assistance in his power to the Americans. He is a man of honour, and will cheerfully and fully comply with what he promises.

Capt. Allain of the ship Hennique, has, we are informed, during his cruise, taken the following prizes, viz.

The British Packet, Prince William Henry, with several thousand dollars on board the ssh’r. Flying Fish, caps. McKenny, and the sloop Phenix, both from New Providence, and well know for there practical depredations upon defenceless commerce of the United States.

On Saturday last arrived here, a Bermuda built sloop, laden with tar and slaves, from Wilmington in North Carolina, bound for France, but cleared fron hamburgs, brought in by three Bahama negroes, who were taken in April last by the ship Hennique, Captain. Allaine, in the Crooked Island Passage, on board the Maxwell and Flying Fish, both belonging to this port.

The particulars we can collect respecting this vessel, are as follows:

The sloop was a British vessel, owned and commanded by a Captain Cox, of Bermuda, but taken by a French privateer, and carried into North Carolina, where she was sold, and purchased by Mr. Langdon, a Merchant there, who loaded the vessel with he above cargo, and afterwards sold the same to one James of Giacomo Gherardi, Lieutenant of the above mentioned privateer ship who was prizemaster of the Prince William Henry Packet, taken at the same time with the Flying Fish and Maxwell.

Gherardi having kept possession of three Bahama negroes named Anthony Sands, Cyrus Fisher, and James Alexander, formed the plan of going to France with the sloop and cargo; and in addition to the negroes and himself, shipped an American master, Gilbert Sherwin, for the purpose of covering the property, together with two American Lads, William Wade, and George Nickson; and with Langdon’s American papers, sailed from Wilmington, telling the negroes he was going to St. Thomas’s.

On the 23rd of last month, supposed near Bermuda, the negroes determined to regain their liberty and return home, in a scuffle with Gherardi, overpowered him, and it is supposed threw him overboard. They then compelled the American master to shape his course for this port.

His Majesty’s advocate General has claimed the sloop and cargo as a droit of the Admiralty; and the brave negroes will be rewarded with two thirds; if not the whole, of the capture, upon representation to his Majesty.

Upon examining Gherardi’s papers the mask has been completely discovered. Some of the plunder of the Prince William Henry Packet sill remains in his trunks. 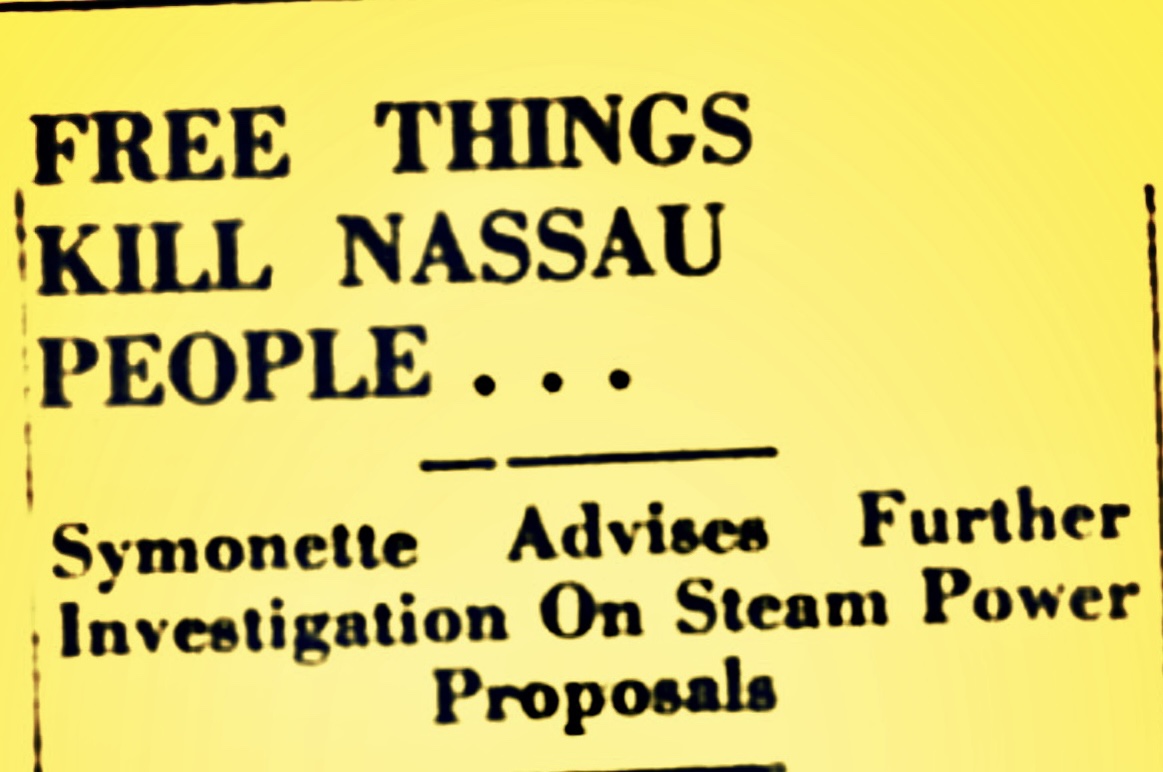 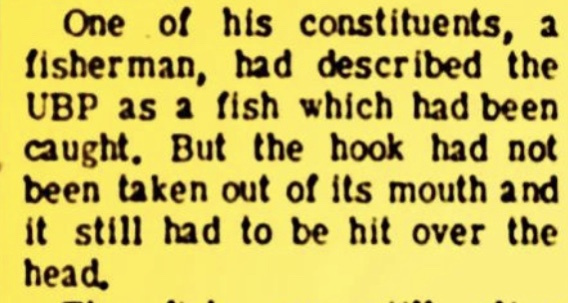 ‘UBP is a hooked fish, club it over the head, lest it gain strength and jump out the boat’ Pindling 1967

Grand Bahama Bank and Trust, the Bank Waiting For Jungle to be Cleared 1960