The name Reuben Roberts should have been part of popular Bahamian, post-emancipation history. But, it’s not. Nobody really knows that Reuben Roberts, a Nassau negro, made legal history because of what happened to him on 19th May 1852, in Charleston, South Carolina. Roberts was forcibly imprisoned, in order to protect the slave owning state of South Carolina, from the ideas that free or immigrant negroes could possibly impart to enslaved blacks and coloureds.

(Not Actual Likeness of Reuben Roberts. Used for Illustration Only)

While the case of Reuben Roberts vs. Jeremiah D. Yates, esq, Sheriff of Charleston district (1852), did not gain the historical popularity of other legal challenges like the Dred Scott case, the Amistad or the Creole Cases, just to name a few, Roberts v. Yates (1852) remains significant as another watershed moment involving legal cases, which challenged the institution and byproducts of negro slavery.

First things first. In 1852, slavery was still very much a legal institution in the southern states of the United States of America. Reuben Roberts, a Bahamian negro, was legally a free man, due to the British outlawing slavery, in their West Indian colonies, in 1834. It was a given that free negroes risked enslavement going into places where slavery was still legal. Unscrupulous traffickers thought nothing of kidnapping freed persons to sell them into life long bondage.

In the southern American slave states, extensive laws were designed to cover the life of the negro, from cradle to the grave. There were laws as well which covered free negroes, from elsewhere, coming in slave-owning states. Slave owning states like South Carolina, Louisiana and others sought to reduce the influence free negroes had on slaves in their jurisdictions by reducing their access or ability to even enter.

Legislators in the South, especially did not like free negroes coming into these slave states from jurisdictions which had already emancipated their negroes. Emancipation was an accursed idea which bred notions of anarchy and revolt. The risk of free negroes stirring up trouble or instigating uprisings was too great a possibility, and so various states took strict measures to reduce the interaction between immigrant emancipated negroes and their slaves.

…Any one at all familiar with this state of feeling in the North, must allow that Indiana and Illinois are not the only non-slaveholding states which are hostile to the introduction of Free Negroes within their borders, and though such hostility has not yet manifested itself in the vigourous form of law, still we feel warranted in venturing the prediction, that ere long, the settled policy of every State in the Union, will be to localise the residents of Free Negro, or force their emigration to Liberia.

The general conviction that Free Negroes are the worst population which estate can have, seems to be fast gaining ground everywhere. This may be observed in the diminished and diminishing facility with which a slave can be emancipated at the South, and the anxiety which pervades both the North and South to encourage colonisation to Liberia. The time perhaps it’s not far distant, when Free Negroes will be forcibly removed as the Indian tribes have been.

The question of compelling them to migrate has been mooted both here and at the north, and the work of expulsion is already begun in Virginia, which will, we think, soon be imitated by other States.

To understand how South Carolina laws came to impact the life of Bahamian Rueben Roberts, you have to first understand some of the statute law of South Carolina, specifically, The Seaman’s Act of 1822.

The story ostensibly begins decades before with the threat of a slave uprising in South Carolina which authorities said was initiated by an immigrant slave, Denmark Vesey, who, by a bit of luck, won some money and bought his freedom.

“Denmark Vesey (also Telemaque) (ca. 1767 – July 2, 1822) was a literate, skilled carpenter and leader among African Americans in Charleston, South Carolina. He was accused and convicted of being the ringleader of “the rising,” a major potential slave revolt planned for the city in June 1822; he was executed.

Denmark Vesey, was likely born into slavery on the island of St. Thomas. He served a master Captain John Vesey, in Bermuda, for some time before being brought to Charleston, where he gained his freedom.

Vesey won $1,500 in the East Bay lottery, and purchased his freedom around the age of 32. He had a good business and a family, but was unable to buy his first wife Beck and their children out of slavery. Vesey became active in the Second Presbyterian Church; in 1818 he was among the founders of an independent African Methodist Episcopal (AME) Church, in the city, which had the support of white clergy.

In 1822,?Vesey was alleged to be the ringleader of a planned slave revolt. Vesey and his followers were said to be planning to kill slaveholders in Charleston, liberate the slaves, and sail to the black republic of Haiti for refuge. By some accounts, it would have involved thousands of slaves in the city and others on plantations miles away. City officials had a militia arrest the plot’s leaders and many suspected followers in June before the rising could begin. Not one white person was killed or injured.

After the Vesey Plot, the legislature further restricted the movement of free blacks and free people of colour; if one left the state for any reason, that person could not return. In addition, it required each free black to have documented white “guardians” to vouch for their character.

The legislature also passed the Seaman’s Act of 1822, which required free black sailors on ships that docked in Charleston to be imprisoned in the city jail for the period that their ships were in port.”

Reuben Roberts, was described as a full-blooded negro, a British subject, born and living in Nassau, New Providence, Bahamas.

In 1852, Reuben gave his age as twenty-four years old. But he looked much older. Of this, one newspaper wrote “It has been often remarked that negroes wear their age better in slavery than in any other state.”

Reuben Roberts was serving as a cook on board the British schooner Clyde.

The schooner Clyde was under the direction of a Captain Bethel.

The Clyde had sailed from Nassau, New Providence to Baracoa, Cuba then onto Charleston, South Carolina. The Clyde arrived in the Charleston port on 19th May 1852.

According to the Colored Seaman’s Act 1835, the sheriff had the authority to search any ship coming into the Carolina harbour for negroes. Any negroes found, were held in prison for the duration of the time the ship they arrived on, was in port.

On the 9th of June 1852, on behalf of Reuben Roberts, a writ in trespass, for assault and false imprisonment, from the Federal Court was served upon Sheriff Yates, with damages at $4,000.

The writ was filed by Lawyer James Louis Petigru, Esq.

The Convention of Commerce between Great Britain and the United States of America signed at London on the 3rd day of July, 1815.

The plaintiff’s case relied upon the legal convention signed by Britain and America in 1815. The convention regarded the inhabitants and citizens of these places to liberty and security, as they travelled, with their ships and cargoes through these territories for commercial purposes.

The case of Rueben Roberts v. Jeremiah Yates, sparked fiery debate about the rights of free men of colour. In 1853, he had few rights especially in the South.

The Freemen’s Journal notes the provisions of the constitution of the United States, that citizens of each State shall be entitled to all privileges and immunities of citizens of several States.

In practice however, the Journal notes, the treatment of free negroes, was far from the rights afforded by the constitution.

I feel it my duty to call your attention to certain proceedings which have grown out of the enforcement of that law of our State, which requires the Sheriff of Charleston to seize and imprison coloured seamen who are were brought to that port. You will remember that the British Council addressed a communication to the Legislature in December, 1850, on the subject of a modification of this law. A committee was appointed by the House and Senate to report upon it at the next session of the Legislature.

These committees reported adverse to any modification.

On the 19th of May, Reuben Roberts, a coloured seamen, and native of Nassau, arrived in the steamer Clyde from Barcoca. The sheriff of Charleston, in conformity with the law of the State, which has been in force since 1823, arrested and lodged him in the district jail, which he was detained until 26th of May, when, the Clyde being ready to sale, Roberts was put on board, and sailed the same day.

On 9th of June, a Writ of Trespass for Assault and False imprisonment from the Federal Court, was served upon Sheriff Yates, laying the damages at $4000.

While these proceedings were pending, the sheriff of Charleston had my instructions not to give up the prisoner, even if the wit of Habeas Corpus had been granted. I considered that the ‘Act of 1844’ entitled ‘An Act more effectually to prevent Negroes and other persons of colour from entering into this State, and for other purposes,’ made it my duty to do so.

The Act of 1844, I take it, was intended to prevent all interference on the part of any power on the face of the earth with the execution of this police regulation, which is so essential to the peace and safety of our community. Had the Legislature which passed it ever dreamed that the sheriff was to be subjected to the annoyance of being dragged before the Federal Court for doing his duty under a law of the State, I am sure it would have provided for his protection.

As no such provision has been made for so unexpected a contingency, I recommend that you so amend this Act of 1844, that it may meet any case that may arise.

The case was heard before a jury. A. H. Hayden, Esq. was the foreman. The jury found for the defendant. The judge summed up by noting the acts of State, under which the defendant justified, he considered to be valid and constitutional.

For the defence, Attorney General Hayne produced a witness to prove the only thing necessary to win the case. The defence only had to unequivocally prove that Reuben Roberts was indeed a NEGRO!

The plaintiff submitted, in due form, a bill for exception to the judge’s charge. The case went to the Supreme Court of the United States.

Many predicted the Supreme Court to affirm the decision of the State Court.

WHATEVER HAPPENED TO REUBEN ROBERTS?

Next to nothing, in fact nothing, is really known about the life of Reuben Roberts. However, he may have been the same R. Roberts who signed on as a crew man on the ship Sultana in 1878.

In 1878, an R. Roberts, born in Nassau about the year 1833, was recorded as signing on to work on the ship Sultana which was registered in Liverpool, England.

Roberts age was 45 years old in 1878. On the paper, an X is made in the middle of his name. This indicates that he was illiterate. Someone else wrote the same and then he would have been asked to make his X. 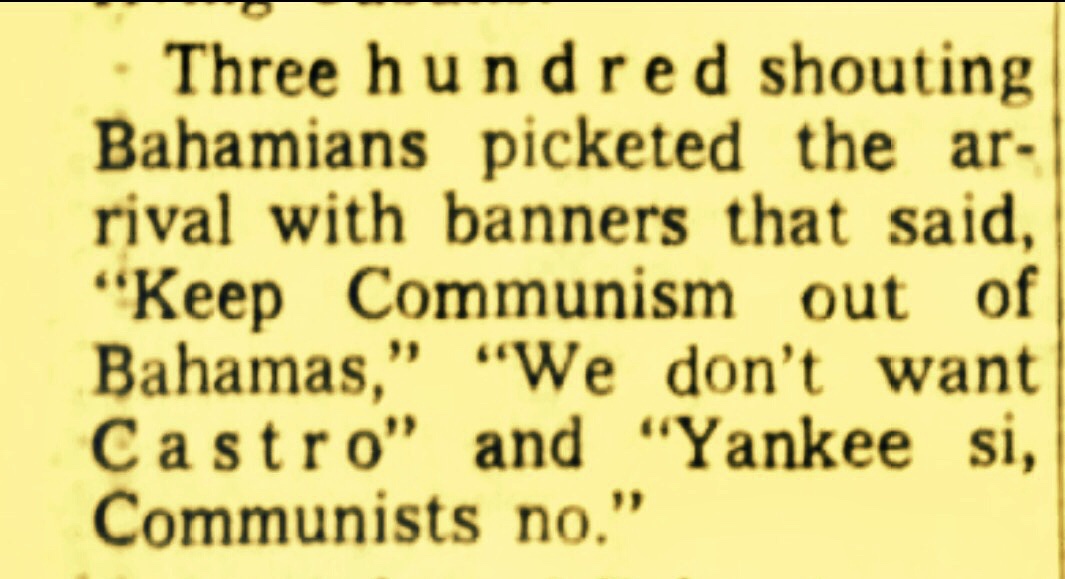 Ephraim Francis born in Bimini died on a torpedoed ship in World War One.