Master and servant. This was supposedly all there was to their relationship. At least, that was all the Nassau Times reported, on Wednesday October 29, 1884.

Of course, given the period in history, this is not entirely unexpected. Queen Victoria was on the throne, and the old horse and carriage, was the only mode of transportation in Nassau. Salacious details of this case would have been kept for the ears of the court, and the magistrate exclusively. To report on unseemly bits of untidy information, would have only been seen, as being counterproductive to the public interest.

As just Master and Servant however, it doesn’t explain the sudden rage. It doesn’t fully address why the Master killed the Servant, in a room full of people, only because, the so called Servant refused to drink with him and simply wanted to go home. It offers a hollow explanation given that slavery had been over some fifty years already by 1884, yet the servant, Pancho, was referred to as “my nigger.” This suggests, a relationship far removed from just worker and employer – it suggests one of possession and ownership.

Darville, it seems, didn’t like Pancho disobeying him in public. We do not know why Pancho wanted to leave just after they got there. He obviously felt uncomfortable at what he saw around him. Did Darville want Pancho to do something that he didn’t want to do?

Pancho is leaning against a barrel and this made Darville angry. He told Pancho to stand up. Why?

Was Darville among friends and went there to show Pancho off to them? Details as to the ages of men were not given. It would be interesting to know just how old poor Pancho was.

We do not know what kind of store this was on East Bay Street, which was open at 9:00 p.m. for the purposes of drinking. It was obviously no store, but a bar or tavern. The Nassau Times was giving the place the title of store, but no store in Nassau would have been opened at this time of night.

It is a given that in 1884, relationships were severely defined and strictly ordered, according to long held societal and biblical rules. Things that went on behind closed doors were only whispered upon. And like, for centuries before, and for almost a century after, intimate relationships between men were closely guarded secrets. For the most part, these types of relationships, were against numerous laws.

“Stand up there. You are my nigger. If you move I’ll stab you.”

A SERIOUS AFFRAY – On Saturday night last a man named Edward Alexander alias Pancho was seriously wounded by one George Darville, so as to render his having to be taken to the Asylum necessary, where he has since been lying in a very precarious state.

It appears that Darville is a butcher by trade and keeps a shop in the Eastern District; Pancho has been in his employment for seven years as a servant. On Saturday night about 9 o’clock they both went into the store of one Thomas A Sands in East Bay Street; there were several other persons in the store at the time, and nothing was observed by them to cause a belief that the parties were in any way quarrelling or excited.

Darville stood in front of the Counter, with Pancho directly opposite him leaning on a barrel. Some words past between them when Darville suddenly exclaimed: “Stand up there, you are my nigger, if you move I’ll stab you.”

He Darville at the time having a large butchers knife in his hand. Pancho replied: “I came in here with you to have a drink, now I do not wish any; I am going.”

He then moved to go away when Darville suddenly attacked him, plunging the knife in his side; exclaiming with a fearful oath; “You move ab!”

Pancho shouted: ” Oh! Lord! I am stabbed,” and on pulling up his clothes the blood was seen to gush out of the wound. Some little while after the man was taken to the Asylum, where his wound was dressed by the physician Dr. Robinson.

Darville was also secured and lodged in the Station House. The case came before the Police Magistrate yesterday and there being a probability so far of the man Pancho recovering, the prisoner was remanded to Friday.

We observed, that a number of cases of serious wounding have occurred lately, and trust that the law in this instance will be enforced to the full extent.

Since our last issue, the man, Edwards who had been taken to the Asylum after the wounding by George G. Darville has died. His death occurred at 1 p.m. yesterday. A Coroner’s Jury was at once summoned, and an inquisition held on the body. After a lengthy and careful examination of the witnesses, an autopsy of the body having been made by Dr. Robinson and Surgeon Major Adye-Curran, the Coroner and Jury consulted together and returned the following verdict unanimously:

On the 25th day of October past in the year aforesaid (1884) George G. Darville feloniously, wilfully and of his malice aforethought, one James Alexander Edwards did kill and murder against the peace of our Lady the Queen her Crown and Dignity. Darville has been committed by the Coroner, and will await his trial before the General Court of these Islands at the next Session.

At the next sitting of the General Court, on Friday 23rd. January, 1885, Darville was sentenced to twenty years penal servitude. The charge of murder was not returned. Darville was charged with Manslaughter. Had Darville been convicted of murder, he would have surely hanged. 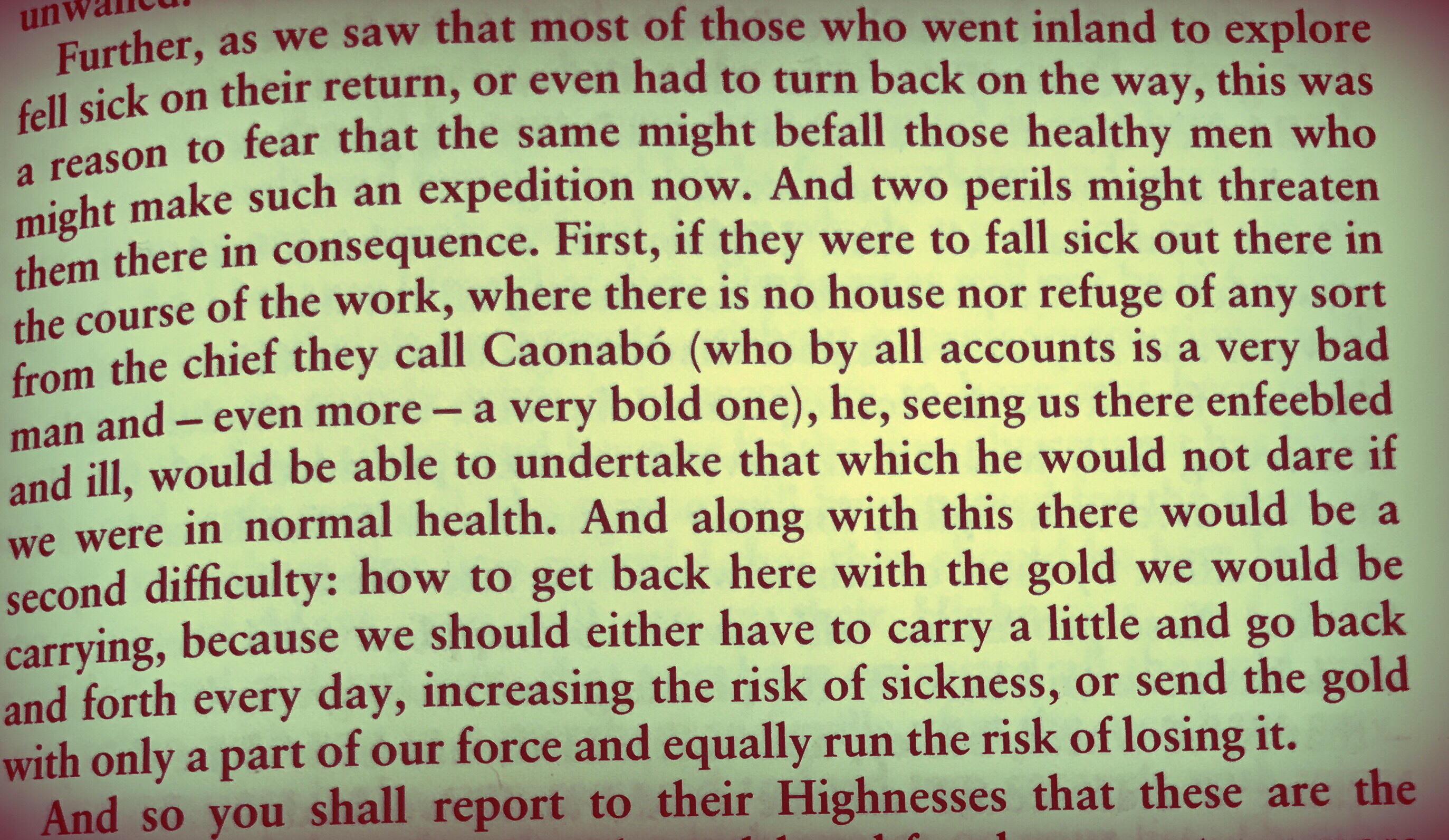 Of the five kings Columbus met on Hispanola, one of them was Bahamian. Meet King Caonabó, 1492