The UBP (United Bahamian Party) officially announced its formation on 1st March 1958. They formed themselves out of the sitting independent members of the House of Assembly, largely in response to earthquake like changes occurring in the social order.  Cyril Stevenson, one of the founding members of the Progressive Liberal Party, responded to the announcement of the new UBP Party by saying “They have crawled out at last.” By 1960, the Bay Street Boys, the ruling political elite who made up the UBP, were desperate. The social order was changing right before their very eyes. In response to changing times, the UBP decided to run two black candidates in the May 1960 by-election.

In 1956, a most extraordinary event happened in the Bahamas which would precipitate sweeping political change. This day would eventually culminate in the push for national independence in 1973.  On 8th June 1956,  general elections were held in the Bahamas. Although the newly formed Progressive Liberal Party, formed three years earlier in 1953,   emerged as the largest party, winning six seats, the majority of seats were won by independents.

In November 1957, a workers dispute arose when the Bahamian government, with a majority governed by twenty-two independent candidates,  granted to the white tour companies, a virtually exclusive right to operate the tourist transportation service, between the new International Airport and the city of Nassau. On 1st November, 1957 he  Taxi Cab Union, led by Sir Clifford Darling and others,  blocked all traffic to and from Nassau International Airport in protest of what they called a racial bar on tourist transportation.  This went on for several weeks. Sir Randol Fawkes, leader of The Bahamas Federation of Labour, was called in to assist in settling the dispute and bringing parity back to black cab drivers.

“Sir Randol responded with the urgency that the situation required and at a meeting of the Bahamas Federation of Labour,  he presented a motion that stated that the B.F.of L.  “should call a General Strike to aid the Taxi Union and to dramatize the fight of all Bahamians for greater dignity and self-respect on the jobsite through decent wages and better working conditions.”  The motion was unanimously carried.”

In fear of possible riots and mayhem, Governor, Sir Raynor Arthur contacted London. London sent troops from Jamaica and the war ship HMS Ulster to guard Nassau against the picketing and boycotting black citizens. The fear of racial tensions boiling over into riots and destruction were never realised into anything other than peaceful protests.

On January 29th, 1958, His Excellency at last brought representatives of the tour companies and the Taxi-Union together at a top level conference.  At the end of the talks,  the officers of each organization signed a detailed agreement providing for the more equitable division of transportation of passengers to and from the airport.

HANSARD: Debate House of Commons, London, 30 January, 1958: Lennnox-Boyd:  The strike in the Bahamas originated from a dispute between two conflicting commercial interests and not from one between employers and employees. Stoppages of work by employees in public and private services, including the hotels, have since taken place. There has been no violence or disorder but as a precaution a company of troops has been flown in from Jamaica. This has provided much needed relief for the local police. H.M.S. “Ulster” went to Nassau for the purpose of providing technicians to maintain essential services. Utilities such as electricity and water have continued uninterrupted. Meetings have been taking place between representatives of the parties involved under impartial chairmanship. The Governor has been making continuous efforts to get the parties concerned to effect a settlement and, although I have no details as yet, I am glad to say that the strike is ending today.

THE AFTERMATH OF THE 1958 GENERAL STRIKE

HANSARD: Debate House of Commons, London, 30 January, 1958: J. Johnson: Is not the action of the taxi drivers a symptom of deep underlying conditions—bad housing, bad wages, the colour bar, no coloured man on the Executive Council? Does not the constitution need to be considered and ought there not to be a Commission, on the lines of the Elliot Commission to Kenya, with power to ask questions and to take evidence and to prepare a White Paper for the House to examine?

The General Strike of 1958 succeeded in getting the attention of the British. They began pushing for constitutional reforms in the Bahamas for which various people in the country had been pushing for since 1925. The PLP was pushing for the franchise. The independent candidate block was against it.  In the end, by 1960, the company vote was abolished, the extension of the franchise to all men over 21 became law. And most importantly to this chapter of Bahamian history,  FOUR new parliamentary seats were created.

By-elections were held in May 1960 to fill these new seats.

The UBP ran two black candidates in a bid to appeal to a new social demographic in the Bahamas, the rise of the influential black voters, who had elected six PLP candidates in 1956.

The UBP attempted to appeal to “THE NEW BAHAMIANS.” 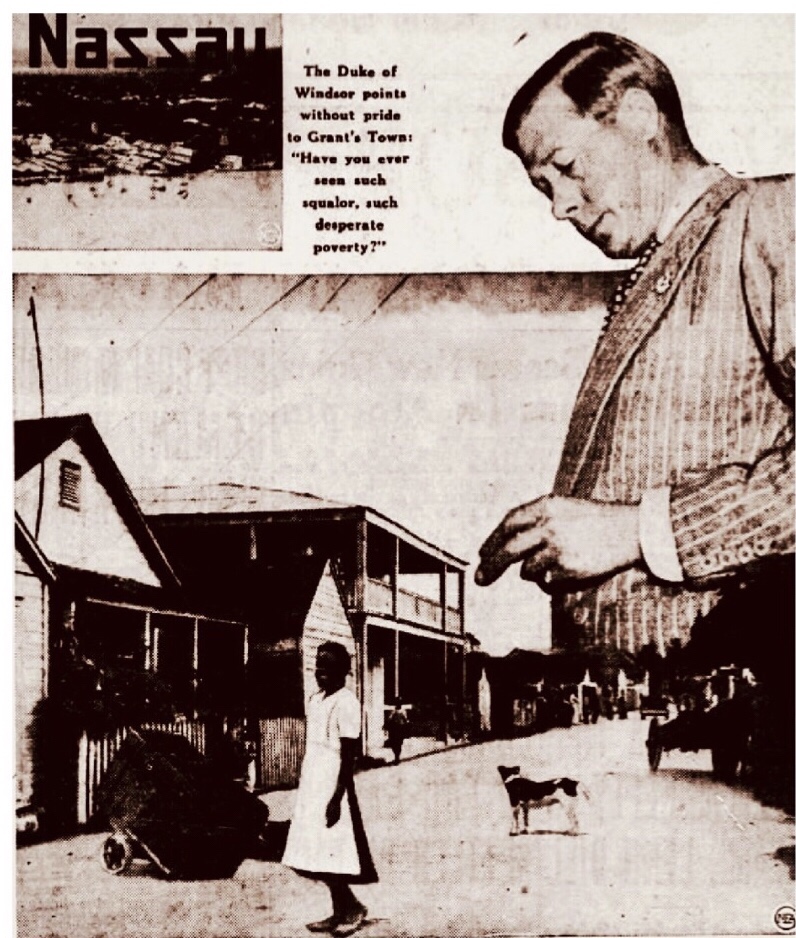